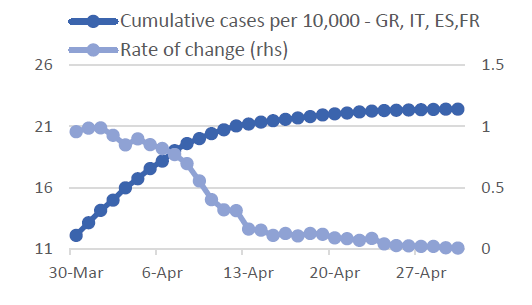 Stocks remained volatile and registered their worst quarterly performance since 2008. However an expansion in the manufacturing Purchasing Managers’ Index for China provided relief that other economies could rebound successfully from the contraction due to the lockdowns. Another positive news for the markets was a tweet from President Trump calling for a further fiscal expansion of USD 2 trillion to boost infrastructure spending. Long term treasury yields remained soft as the US FED continued its asset purchases and bond issuance in the corporate space picked up. However yields on short term government bills remained relatively elevated due to an increase in issuance to finance fiscal spending. Issuance in the high yield space has yet to recover from the abrupt drop in indices and would not have been helped by the news of an increase in infections rate in New York and California on Wednesday. In a sign that volatility remains high, the Russell 2000 index fell by 7% on Wednesday.

The rate of increase of infections in Europe has been slowing and is an indication that the worst may be behind us. The chart above which shows the combined figures for Italy, Spain, Germany and France indicates that we may have reached a peak during the past week (Source J. Hopkins University/Algebris). However the cumulative number of infected people would still continue to rise until the end of this month at least and this will have an impact on the easing of confinement conditions. News from the US was also positive over the weekend as the rate of change of infections slowed. These imply that restrictions to economic activity will be gradually lifted during this quarter and an economic recovery in the major economies will start.

Having said that, the risks for equities depends on whether consumer and business confidence rebounds speedily (U-turn) and whether there is a second round of infections of covid19. Hence equity and credit exposure may be underweighted in portfolios. As deflationary pressures subside, equity exposures should return to normal. Credit exposures could take longer to normalise due to probable downgrades in this segment.

Can Policymakers Limit The Infection Rate?​​​​​​​

Labour Market Weakness Forces The US Fed To Act