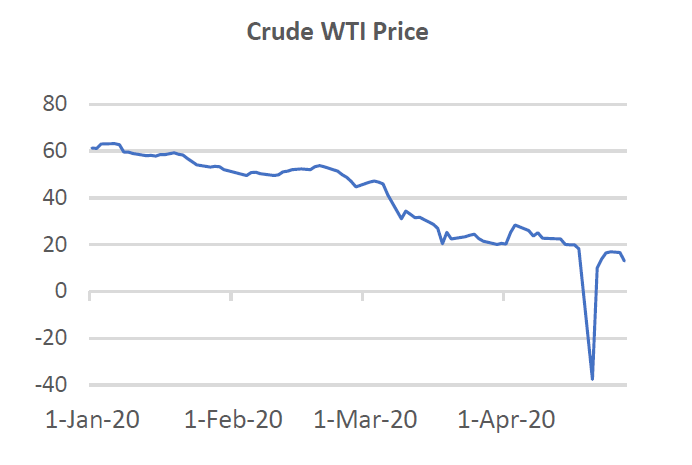 Major indices remained range-bound during last week. Within the S&P500, the utilities, staples and financial sectors lagged. Energy stocks rallied on Thursday and outperformed. However futures contracts for the West Texas Intermediate expiring last week fell to minus USD 37 on Monday meaning traders were getting paid to buy the commodity (chart above). Prices recovered and are not indicating a systemic risk for the sector. The Russell2000 which is indicative of the breadth of the market ended higher for the week.

Rating downgrades are spreading and analysts revised their estimates for both Alphabet and Apple lower last week. High yield bonds remained volatile in the US and in Europe. The energy sector has a large weight in high yield indices and the number of bankruptcies has reached its highest level in a decade. On the macroeconomic front, given the current context of the lockdowns, the record-low preliminary estimates of Manufacturing PMIs were unsurprising.

But there was also positive news last week as the US voted an additional fiscal package of USD 484 bn to increase funding for small businesses. In addition the ECB relaxed its asset purchases rules to enable it to buy non-investment grade bonds until September 2021. This decision was hastily taken by the governing council ahead of its planned meeting of this week as there are reports that S&P might cut Italy’s credit rating. On the fiscal side, European Union leaders approved a EUR 480 bn. emergency rescue package and the need for a recovery fund to offset the effects of the pandemic. The crucial details about funding are yet to be finalised but Germany’s chancellor declared that her country was willing to make a significant effort to support the recovery.

In Japan, there are reports that the central bank will remove caps on its asset purchases. This will enable it to double the size of its corporate bonds and commercial paper.

Highest Ever Monetary Easing By FED Stabilizes The S&P500