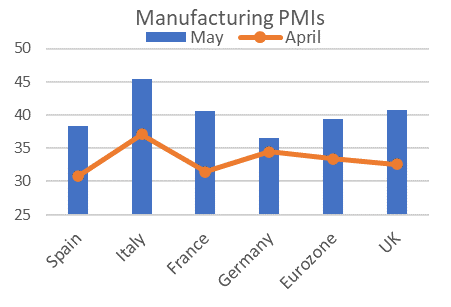 Major indices rose for the second week in a row. Within the S&P500 a mix of defensive and cyclical sectors were the better performers. Financials, Materials, Real Estate and Utilities were the four sectors to gain over 5% during the week. The communications sector was an
unusual laggard with a gain of below 1% after a drop in the share prices of Facebook and Twitter. The latter came under pressure after posting a fact-check notice with regards to a tweet by President Trump. The
President retaliated with an executive order calling on the Federal Communications Commission to investigate whether Twitter had acted in good faith and threatened to tighten regulations on social media platforms. Much of the optimism on Wall Street was again due to
progressive easing of restrictions for the retail sector as well as restaurants and further advances in the development of a vaccine.

It must also be noted that the economic data was not as bad as analysts had estimated; US durable goods orders fell less than excepted and new home sales for April actually rose. Furthermore, data released by IHS Markit this morning indicated a strong rebound in
manufacturing PMIs in Spain, Italy, France, Germany and the UK (see chart above). The European Commission also unveiled a EUR 750 billion stimulus package out of which two thirds will be used as grants
to help countries like Spain and Italy. On the monetary side, the ECB is expected to further expand its stimulus during its meeting this week. In addition, Germany’s fiscal authorities are working on a stimulus package which will be between EUR 50 to EUR 100 billion.

The negative news during the week was rising tensions between the US and China which could spill over to trade. The first round of Brexit negotiations also begins this week and this could undermine the strength of the pound. Regardless, the macroeconomic outlook has
improved significantly compared to a couple of months ago and investor confidence should improve further in the medium term.

US Markit Services PMI Indicates A Rebound In Activity​​​​​​​

The Economic Impact of Covid-19