Minister of Finance Tito Mboweni and team have asked for an extension to 28 October to deliver his medium-term budget policy speech to flesh out detailed plans to execute the strategy to fix S.A. As Mboweni has warned, the country faces the real prospect of a financial crisis if the wrong moves are made.  With a conservative estimate of at least 20% of jobs and businesses gone forever from the S.A. business landscape, many are praying that reason will prevail in Parliament. However, early leaks suggest there is more pain to come for higher-income earners.

Omnia management has indicated that shareholders might look forward to a special dividend at the end of the financial year once it concludes the sale of its Oro Agri division to one of the world's leading agricultural biotech groups, Rovensa.  Rovensa will pay a total of $152-million (R2.5-billion) for Oro Agri, comprising $146.9-million for the businesses and the balance for debts owing by Oro Agri.  Omnia acquired the group in 2018 for $100-million, securing a decent return of 52% in just more than two years.

Eskom has a debt load of about R488-billion (R31bn overdue), which weighs on already deteriorating public finances. But there seems to be no credible plan to reduce the power utility's crippling debt.

Trade activity has improved in South Africa, with the seasonally adjusted Trade Activity Index measuring 50 index points in September, picking up from 37 index points in July and reaching 41 in August. However, compared with September 2019, only 31% of the respondents experienced improved trade conditions, the South African Chamber of Commerce and Industry said. The chamber said 56% of respondents expected trade conditions to improve in the next six months as trade activity continues to recover.

Woolworths is aiming for a more significant share of South Africa's fresh food and grocery market, by committing "to invest R1 billion in its prices" over the next two-to-three years – 75% of which will go into lowering food prices.

South Africa received a C-grade in the 2020 global gold standard report on pensions compiled annually by Mercer and the CFA Institute. It came 27th of 39 nations surveyed, with an index score of 53.2, lifted by a 78% for "integrity" but depressed by scores in the mid-40s for "adequacy" and "sustainability". S.A.'s index is fractionally above the 52.6 for 2019. Click here to access the full report.

The Office for National Statistics showed U.K. annual inflation rose 0.5% in September, versus a 0.2% rise in August. Contributing to the increase were higher transport costs and higher prices at restaurants, after the end of the government's Eat Out to Help Out program, which cut the price of meals.

Britain and the European Union will resume their stalled trade negotiations at an "intensified" pace, in the hope of striking a deal within weeks to avoid a messy economic breakup at the end of the year.

The European Union has made a historic debut on the bond markets as it looks to fund the region's recovery from the coronavirus crisis.  The bloc was after 17 billion euros ($20.15-billion) in the bond market on Tuesday to fund its coronavirus-related unemployment scheme, known as SURE. However, the demand from investors was well above that amount, reaching 233 billion euros ($276-billion) — which it said was a record order book and the largest supranational transaction ever launched.

Ireland begins a six-week lockdown tonight. It's the first European Union country to return to "stay at home" rules as the continent grapples with the second wave of coronavirus.

In Spain, the expectations about an 11.5% contraction in gross domestic product during 2020 are maintained, but the growth forecast for 2021 is revised downwards by one percentage point (pp) to 6%.

In September, on a Month-on-Month basis, the producer price index in Germany advanced 0.4%, compared with market expectations of a drop of 0.1%.

The seasonally adjusted trade surplus in Switzerland dropped to CHF2.67bn in September, following a trade surplus of CHF3.30bn in the prior month.

During the first six months of 2020, Sweden's gross domestic product fell by 8.5%. Unemployment is projected to rise to almost 10% at the beginning of next year.  The drop in the gross domestic product is considerably smaller than in southern European countries and the United Kingdom, and 1 to 3 percentage points smaller than in Denmark, Germany and the United States.

Presidential candidate Joe Biden and his party have raised a record amount for any United States Presidential campaign in a month. In September, they raised $383-million and broke their own August record of $365-million.

Meanwhile, the U.S. government budget deficit tripled to a record $3.1 trillion in the fiscal year that ended 30 September, and the U.S. 10-year yield broke above 0.8% to the highest since June after Democratic House Speaker Nancy Pelosi expressed hope for political compromise on a bill this week.

The housing market index registered an unexpected rise to a level of 85.00 in the U.S., in October, compared with a level of 83.00 in the prior month.

The Federal Reserve reported that industrial production suffered its first decline since a 12.7% drop in April amid the shutdowns of businesses that paralysed the economy. The key category that reflects manufacturing output fell 0.3%t. Meanwhile, mining output, which includes oil and gas exploration, fell 5.6%. Production at utilities rose 1.7%.

PayPal Holdings, Inc. jumped nearly 4% after it said it would allow users to buy and sell cryptocurrencies, while also allowing for purchases to be made with them.

Alphabet investors continued to shake off regulatory concerns after the Department of Justice formally filed an antitrust lawsuit against the company on Tuesday. Shares rose more than 1.5%, outperforming the broader market.

One of the Asian subsidiaries of Goldman Sachs has agreed to plead guilty to U.S. charges in the 1MDB money laundering and bribery scandal as part of a global regulatory settlement that includes more than $2.00bn in new penalties.  Goldman had agreed to pay $3.9 billion to Malaysia in September, in return for having criminal charges dropped.

China kept its one-year and five-year loan prime rates unchanged at 3.85% and 4.65%, respectively.

Demand for Hong Kong dollars hasn't been this strong since before the global financial crisis when the U.S. Federal Reserve flooded markets with liquidity.  Stock sales from Chinese megacaps such as Ant Group's anticipated offering have drawn so much cash to Hong Kong that the city's currency has remained near the strongest it's allowed to trade against the greenback since April. This year's inflows have forced the de facto central bank to sell local dollars, interventions that will have helped replenish the cash pool by about HK$286-billion ($37-billion). The record annual increase is more than 2008 and 2009 combined.

Alibaba is spending $3.60bn to buy a controlling stake in one of China's top supermarket operators as it doubles down on grocery delivery, a key growth engine for the e-commerce group during the pandemic.

Hong Kong's Cathay Pacific Airways Ltd. will slash more than 5,000 jobs and close a regional carrier. Another 600 Cathay workers outside of Hong Kong may be affected, and 2,600 unfilled positions will be eliminated. The entire reduction of some 8,500 positions amounts to about 24% of Cathay's headcount, one of the largest hits in the aviation sector globally since the outbreak started.

Minutes of the Reserve Bank of Australia's last policy meeting confirmed that the Board had discussed cutting rates and buying longer-dated debt as a means to support the economy and restrain the currency.

Australian Preliminary Retail Sales for September fell by 1.40%, and improvement on August's 4.20% fall.

Living In A Post-Trump world 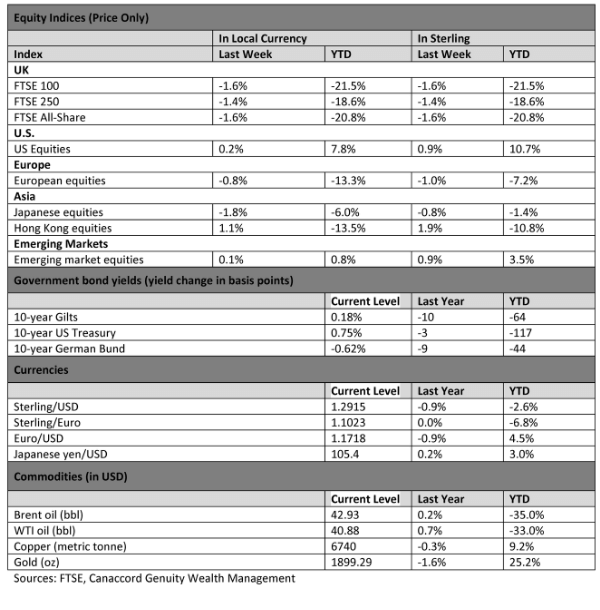 A government policy document seen by Bloomberg this week, points to the possible introduction of a new wealth tax in South Africa, known as a 'solidarity tax'.  Tax revenue collection has been below forecasts for some time, compounded by the fact that the country is in a deep recession. Debt levels continue to climb, as does the unemployment rate, while state enterprises remain tied to constant bailouts.

For the year 2019/2021 SARS collected a gross amount of R1.6-trillion from 4,917,029 taxpayers, which was offset by refunds of R291.9-billion, resulting in net collections of R1.35-trillion. An employment study, by the University of the Free State and HSRC, indicates that of this group of taxpayers, a significant number are no longer employed, with one in seven in the suburbs believed to have lost their jobs by the end of April.

The introduction of a new wealth tax aligns with comments made by chief director Edgar Sishi from the National Treasury in a July parliamentary presentation.  At the time, he said that National Treasury is considering several new tax measures as the government seeks to raise an additional R40 billion through hikes in the coming years.

The recent launch of the economic recovery plan has indicated closer control of the economy being centralised in the Union Buildings, suggesting a kitchen Cabinet with increasing influence over economic policy direction.  Here are the faces behind Ramaphosa's progressive Economic Advisory Council: 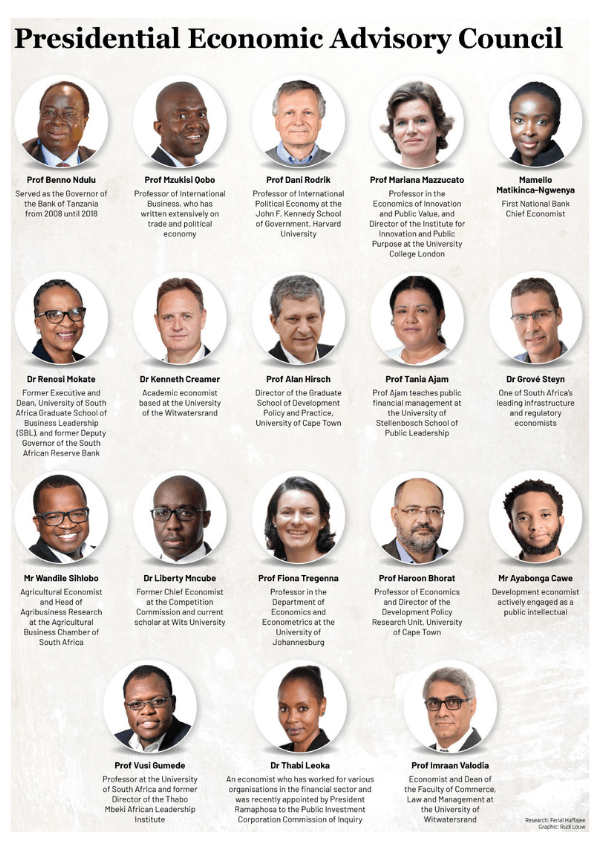 On the topic of wealth:  $10.2-trillion is the combined wealth of the world's billionaires at the end of July 2020, breaking the 2017 record of $8.9-trillion.  China has more billionaires than any country in the world. The annual Hurun China Rich List, released yesterday, listed a new group of 257 billionaires (in U.S. dollar terms).  Rupert Hoogewerf, Hurun Report Chairman and Chief Researcher, said: "China's rich listers added US$1.5-trillion, the equivalent of half the U.K.'s annual gross domestic product, to take them to US$4 trillion, more than the GDP of Germany, the fourth-biggest economy in the world."