We Wave Goodbye To An Unusual Winter

Globally, the total of confirmed coronavirus infections has passed 25 million with more than 842, 000 coronavirus-related deaths.  In the US the WHO has warned of frontline 'burnout' while thousands in Germany rally against renewed coronavirus restrictions.  In South Africa, the overall trend remains one of a steady decline, which is encouraging.

As the newly merged Foreign, Commonwealth and Development Office (FCDO) prepares to launch, Dominic Raab pledged Britain would take the global lead in tackling coronavirus and the growing risk of famine in developing countries by combining diplomatic strength with "world-leading" aid expertise.

A pandemic-fueled tech stock surge has led to a reshuffling at the top of the US three-comma club.  Last week, Tesla CEO Elon Musk overtook Facebook CEO and co-founder Mark Zuckerberg to become the third-richest man in the world, after Jeff Bezos and Bill Gates. MacKenzie Scott, a novelist and philanthropist who recently divorced Amazon founder Jeff Bezos, is now the wealthiest woman in the world.

Japanese Prime Minister Shinzo Abe is stepping down due to chronic ulcerative colitis, and after seven years, his brand of reforms, dubbed "Abenomics" has had mixed success.

Citigroup Inc. has blamed human errors for mistakenly sending $900 million to a fleet of hedge funds reluctant to return it. The bank decided last year to replace the software it helped develop to manage loan payments with the industry standard, and during the rollout, things went wrong.

The Brazilian economy shrank a record 11.4% year-on-year in the second quarter of 2020, officially entering a recession amid the coronavirus pandemic, following a 0.3% contraction in the previous period and compared with market forecasts of a 10.7% plunge.

Following a recent announcement that its CEO would step down, Spur announced the resignation of its COO Mark Farrelly with effect from 31 August. Farrelly had been with the group for 30 years and had been COO since 2012.

The latest Reuters consensus for South African Q2 GDP is now -44.5% quarter on quarter annualised. Although the forecast range is wide (-20% to -53%), the data already in indicates it will probably be closer to -53%.

South Africa's private sector credit rose by 5.12% year-on-year in July 2020, following a marginally revised 5.63% growth in the previous month; the weakest rise in private credit since January.  The pandemic-induced borrowing for corporates is decelerating, with corporate credit softening to 6.6% year-on-year, from 7.6% in June.

After a record 2.6% gain at the end of last week, the rand weakened as conflict within the national ruling party dragged risk sentiment. The currency bounced back amid a softer greenback and is currently trading at R16.81 against the dollar, R22.46 relative to the pound sterling and R19.94 versus the euro.

The gold price gained due to a weaker US dollar, softer economics out of China and India, as well as reports of border tensions between the two economies.

Germany said its economic contraction wouldn't be as bad as first feared. New projections from the government estimate gross domestic product will only fall 5.8% this year, instead of the 6.3% laid out in its last forecasts.  The flip side is that the rebound next year will be less vigorous – only 4.4% growth instead of 5.2%. Berlin still only expects to return to early 2020 levels of GDP at the start of 2022.

The FTSE 100 fell more than 100 points to close at 5,862 on Tuesday; its lowest level since 15 May, influenced by concerns about pandemic trajectories as well as fears of further Covid-19 quarantine restrictions. At the same time, a stronger pound hit export-oriented firms, while stronger-than-expected PMI data from China supported mining stocks. On the corporate front, Rolls-Royce led the selloff, tumbling 13% to the lowest level since 2008 following last week's disappointing financial results.

According to FactSet's end-of-earnings season analysis, second-quarter earnings for companies in the S&P 500 dropped nearly 32% from the same period a year earlier; the worst result since the first quarter of 2009. However, 84% of companies beat analysts' consensus earnings expectations—the highest figure since FactSet began tracking that metric in 2008.

Almost six months after a record 6.9 million Americans filed for unemployment benefits in March, initial jobless claims continue to run above one million per week, which is higher than any point during the Great Financial Crisis in 2008.  The number of permanently unemployed doubled from February to July, impacting consumer confidence, which fell for the second consecutive month to its lowest level in six years as reported by The Conference Board.

The Dow Jones reversed earlier losses to trade higher, the S&P 500 went up, and the Nasdaq extended gains on the first trading day of September after the ISM Manufacturing PMI beat forecasts in August and showed factory activity was the strongest in near two years.

Demand for the dollar was hit by political uncertainty ahead of November's presidential election and concerns about the US economic recovery amid a lack of progress in negotiations over a coronavirus relief package.

Aadish Kumar, a T. Rowe Price international economist, does not believe that Shinzo Abe's resignation will result in significant changes for Japanese fiscal and monetary policy. "The views of Abe's potential successors indicate that expansionary fiscal policy is likely to continue given the economic damage from the pandemic," he said.  The Nikkei 225 stock index has doubled in value during his time in office but is still only just over half it record level set in 1989. And he didn't manage to rescue Japan from its deflationary spiral. But on balance he was the most successful prime minister Japan has had in decades.

The Caixin China General Manufacturing PMI rose to 53.1 in August 2020 from 52.8 in the previous month, beating market consensus of 52.6. The latest reading pointed to the most significant improvement in the health of the sector since January 2011, adding to signs of economic recovery after the pandemic hit the economy earlier this year. Output and new orders grew by the most since the start of 2011 with new export sales rising for the first time since December 2019. Also, buying activity continued to increase, while staffing levels fell fractionally, hinting that employment was close to stabilisation as firms registered a further increase in backlogs of work. On the price front, both input costs and output charges increased at a softer pace. Finally, business optimism eased to a three-month low. 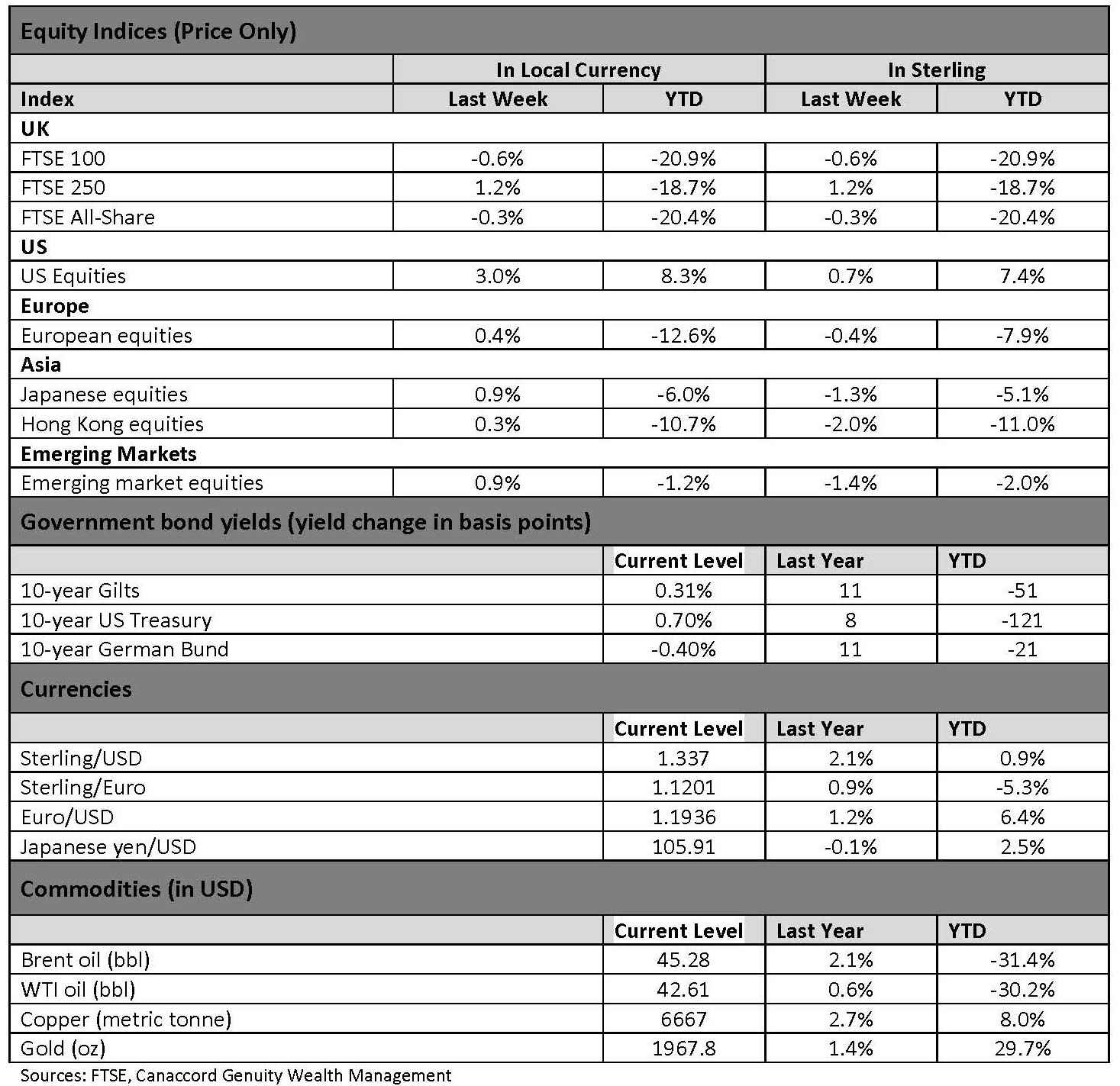 Some Times We Create History, And Other Times History Creates Us