WALL STREET HITS ANOTHER HIGH, WHILE SOUTH AFRICA GETS A LOW BLOW

Many economists and market participants were surprised when ratings agencies Moody's and Fitch sent the South African economy further into junk status by downgrading the economy by one notch.  Moody's who downgraded the country to Ba2 (with a negative outlook) has underlined that a further weakening of South Africa's fiscal position can be expected. Fitch Ratings downgraded South Africa to a B.B.- (also with a negative outlook) and highlighted rising unsustainable government debt along with weak growth and extremely high inequality.  Standard & Poor's was the only rating agency not to downgrade S.A., retaining its B.B.- rating for foreign currency debt (with a stable outlook.

Soon after drawing attention to the economic pain that will emanate from two ratings agency downgrades, and lambasting them for kicking S.A. when it is down, Tito Mboweni created a Twitter frenzy when he asked: 'What should we do about SAA? Do we need a national airline?'  Many of his 962k followers were all for sending the planes to the scrapheap, with financial services entrepreneur Magda Wierzycka, founder of Sygnia, replying: 'How many countries have a national carrier? A handful. It is an unnecessary ego trip. Particularly after the pandemic where S.A. has significantly more important priorities. Saving lives comes to mind.'

Over the past week, there has been a fair amount of data released for the South African economy.  We saw the release of retail sales data for September, which was 1.1% better than the previous month but less than the 5% anticipated. The South African Reserve Bank (SARB) made its final interest rate decision for the year in its Monetary Policy Committee (MPC) meeting. The MPC concluded that no further interest rate changes would take place this year and the repo rate is to remain at 3.5%.

Spur Corporation Limited, in its FY20 results, stated that its revenue decreased to R761.62mn from R944.78mn posted in the previous year.

Santam's court loss in its battle over Covid-19 business interruption claims could put South African insurers on the line for tens of billions of Rand.  The Western Cape High Court ruled that South Africa's largest short-term insurer was fully liable for all losses suffered by some of its clients during the pandemic.

The global internet group, Naspers Limited, in its 1H20 results, revealed that its revenue advanced 44.3% from the same period of the preceding year to $2.50bn.

Investec Property Fund Limited, in its 1H20 results, stated that its revenue decreased to R738.50mn from R874.80mn posted in the corresponding period of the previous year.

On a Year-on-Year basis, retail sales in the U.K. recorded a rise of 5.8% in October, more than market expectations for a rise of 4.2%. In the previous month, retail sales had registered a revised rise of 4.6%.

Compared with a reading of 51.40 in the prior month, the preliminary services PMI fell to a level of 45.80 in the U.K., in November. Market anticipations were for the services PMI to fall to 42.50.

British finance minister Rishi Sunak, who has already pledged over 200 billion pounds ($267bn) to fight the COVID-19 crisis, will free up more cash against the backdrop of the heaviest public borrowing since World War Two.

Rishi Sunak's spending review was a sobering assessment of not only the challenges facing the U.K. economy, but also the enormous economic damage created by the pandemic and the numerous lockdowns around the country, with the budget deficit for 2020 expected to come in at £394bn.

Despite growing optimism that scientific breakthroughs will mean a V-shaped recovery, experts believe there could be a 3% long-term hit to growth - creating a £40bn hole in the public finances that will need to be filled with tax rises or spending cuts.

It is expected that the U.K. economy will shrink by 11.3% this year, and not return to its pre-crisis size until the end of 2022.  Government borrowing will rise to its highest outside of wartime to deal with the economic impact.

The three-year Restart programme, worth £2.9bn will help more than a million unemployed people get back into work.  Despite the support measures from the government such as the furlough scheme, the Office for Budget Responsibility (OBR) projected unemployment to peak in the second quarter of next at 7.5% or 2.6mn people. Joblessness is then forecast to drop every year and touch 4.4% by the end of 2024.

The chancellor guaranteed a pay rise of at least £250 to 2.1 million public sector workers who earn below the median wage of £24,000.  He also announced a pay rise to over a million nurses, doctors and others working in the NHS, but decided to freeze pay rise for the rest of the public sector in a bid to protect jobs.

The core health budget is set to grow by £6.6bn, and the capital investment in the health care sector is set to be increased by £2.3bn.

Tesla's market value has surged over $500.00bn after a fresh wave of buying ahead of the electric carmaker's debut on the blue-chip S&P 500 stock index next month.

Virgin Money's profits have fallen by 77% to £124mn in the last year and braces for a £501m surge in bad loans stemming from the pandemic. The lender took a £501mn impairment charge against an expected surge in bad loans as businesses and individuals battle to stay afloat financially.  The group said it had dished out 67,000 mortgage repayment holidays this year, which represents about 20% of all its balances. It also granted 58,000 personal payment holidays over the period and supported around 30,000 businesses with lending support.

Macy's stock has become vulnerable due to its high operating costs, mall-based locations, and nonessential product assortment. Consequently, the company's stock has lost 39% of its value so far this year, and currently stands at around $10. An enormous debt burden of close to $5.4bn, declining sales trends in the last few years, and an uncertain future of most of its stores located in malls and high-margin tourist business in major cities - will likely add on to its difficulty for a recovery back to pre-Covid levels of around $16.

Successful trials of western pharmaceutical groups' coronavirus vaccines have sliced more than $13.00bn off the market capitalisation of Chinese rivals, hitting Beijing's ambitions to lead the global fight against the pandemic.

India's oil imports from the Middle East hit an eight-month high (rose 27%) in October after producers reduced official selling prices (OSP) while its purchases of African crude declined 39% to a three-month low.

Living In A Post-Trump world 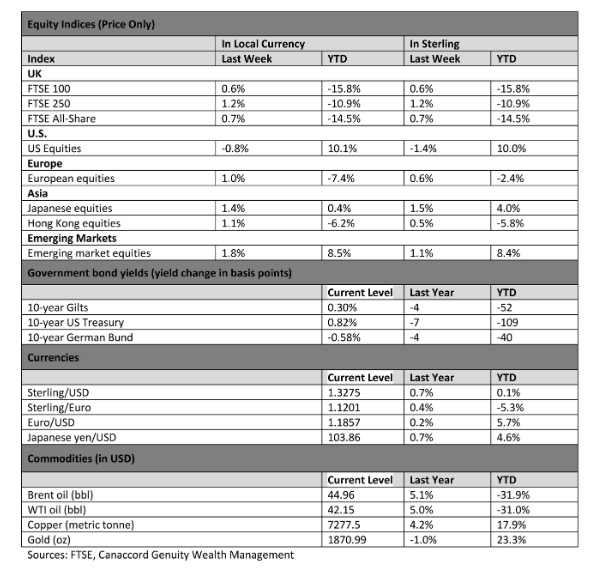 It might seem improbable that this milestone comes during a year in which a global pandemic rocked financial markets. A year in which Americans took to the streets to protest racial injustice, while tens of millions of jobs were lost in just a few months and the incumbent party lost the White House.

Investors were encouraged by progress in the development of coronavirus vaccines and news that the transition of power to President-elect Joe Biden is finally beginning. Traders also welcomed word that Biden has selected Janet Yellen, a widely respected former Federal Reserve chair, as treasury secretary.

Global debt has increased eight-fold.  In a recent statement, the Institute of International Finance (IIF) referred to a "debt tsunami" instigated by governments worldwide as politicians created cash at an unprecedented rate in response to the Covid-19 pandemic. For context, during the four years between 2012 and 2016, global debt grew by $6trn. In the four years to end 2020, the IIF reports, growth has been $52trn.

The financial industry's global association (450 members from 70 countries) calculates that by end 2020 total global debt will be almost $280trn - 365% of the world's GDP. It earmarks South Africa as one of four Emerging Market governments facing extreme interest burdens (alongside Turkey, India and the Philippines).

Pfizer Inc's Covid-19 vaccine could be receiving approval from U.K. regulators as soon as the end of this week. With the formal appraisal set to begin imminently, the National Health Service has been ordered to be on the ready to roll out vaccines by 1 December.

Former president Jacob Zuma's troubles with the law keep piling up. This after judge Raymond Zondo, chairperson of the Zondo commission, said he would open a criminal case against Zuma for walking out of the state capture inquiry last week.  Zuma walked out after Zondo dismissed his application to have him recuse himself from chairing the forum.

Oil prices touched their highest level since March this week after a raft of positive vaccine news sparked a comeback in one of the sectors hardest hit by the pandemic.