Extraodinary Numbers For An Extraordinary Year

Under the hard lockdown during Q2, South Africa's economy contracted by almost 52% on an annualised basis. Stats S.A. said on Tuesday that the economy had rebounded by 66% in Q3 as lockdown measures eased, considerably overshooting a Reuters consensus among economists of 52.6%. The quarter-on-quarter seasonally adjusted growth rate, without annualising, was 13.5%.  Mining output surged by 288% and manufacturing by 210%. The trade, catering and accommodation industry increased by 137% and agriculture was up 18.5%.   "Despite the rebound, the economy is still 5.8% smaller than it was at the end of 2019," Stats S.A. said in a statement.

The electricity production in South Africa slid 2.8% on a Year-on-Year basis, in October.

According to data from the World Bank, SMMEs in South Africa contribute up to 40% of national income.  Apart from income, research from the Organisation for Economic Co-operation and Development (OECD) puts the contribution of total employment by SMMEs between 45% and 50%.  President Cyril Ramaphosa stressed the importance of SMME's in rebuilding the country's economy during his Economic Reconstruction and Recovery Plan address to Parliament in which he highlighted the goal of reindustrialising the economy by focusing on growing the approximately 3.5mn small businesses.

In October, the authorities issued a circular allowing 100% of S.A.'s retirement funding to be invested in any Rand-denominated asset - including, specifically, inwardly-listed baskets of foreign shares via low-cost ETFs.  The National Treasury, the South African Reserve Bank (Sarb) and the Financial Sector Conduct Authority (FSCA) have since withdrawn the circular to provide clarification on the reclassification of inward-listed instruments.

The U.K. economy grew by just 0.4% in October but remained 7.9% below pre-pandemic.  The Office for National Statistics (ONS) said the economy has now grown for six months running, recovering by 23.4% since the low-point of the recession during the spring lockdown. Britain could take two years to recover from the impact of the coronavirus pandemic fully, industry experts have warned.   It comes as unemployment is set to peak at 2.51mn people, or 7.3% of the workforce, in the second quarter of next year, once furlough ends.

German industrial order figures were in focus.  In October, industrial production rose by 3.2% following a 1.6% increase in September. Economists had forecast a 2.7% rise. According to Destatis:

* Production in the automotive industry jumped by 9.9% on the previous month, while down by 6% since February 2020.

* In October 2020, production in industry excluding energy and construction was up 3.3%.

* The production of consumer goods fell by 2.4%, however.

* Outside industry, energy production was up by 4.0%, with the production of construction rising by 1.6%.

* Compared with October 2019, industrial production was down by 3%.

On Tuesday, Spain's Inclusion and Social Security Minister, José Luis Escrivá minister tweeted that Spain's GDP would increase by 2.4% in the fourth quarter of 2020 as long as the temporary lay-off schemes financed by the state (Expedientes de Regulación Temporal de Empleo, "ERTE" in Spanish) remain stable and self-employed people manage to keep their jobs until the end of the year.

Airbnb Inc. plans to boost the proposed price range to between $56 and $60 a share of its initial public offering, the latest sign that the red-hot IPO market is ending the year on a high note.  The new range would give the home-rental company a valuation of as much as $42bn on a fully diluted basis and including proceeds from the offering.

DoorDash Inc. completed one of the biggest initial public offerings of a busy year yesterday and ended its first day of trading worth more than $60bn.

According to Dealogic data that dates back to 1995, so far this year, more than $140bn has been raised in initial public offerings on U.S. exchanges, far exceeding the previous full-year record high set at the height of the dot-com boom in 1999.

The Labor Department said Friday that 245,000 jobs were created in November, well below the Dow Jones estimate of 440,000.  On a month-on-month basis, average hourly earnings of all employees in the U.S. climbed 0.3%, compared with an advance of 0.1% in the prior month. In the week ended the 28th of November 2020, the seasonally adjusted number of initial jobless claims recorded a drop to 712.00K in the U.S., more than market expectations for a drop to a level of 775.00K.

The Trade deficit widened to $63.10bn in October.

Japanese automaker Honda on Wednesday suspended production at its British plant after suffering a shortfall in parts, after blockages at ports caused by the coronavirus pandemic and Brexit.

In 3Q20, the final annualised gross domestic product registered a rise of 22.9% on a quarterly basis in Japan, compared with a drop of 28.8% in the previous quarter.  In October, the preliminary leading economic index advanced to 93.80, from its prior level of 93.30, and on an annual basis, household spending registered a rise of 1.9%.

Australia is rebounding economically. There's been a revival in spending across the country, with retail trade rising 1.4% month-on-month to October, which follows a fall of 1.1% in September.  The latest data from the Australian Bureau of Statistics showed retail turnover increasing 7.1% compared to October 2019 at the national level.  In November, the business confidence index climbed to 12.00.

The Japan Center for Economic Research recently released its sixth annual report on medium-term forecasts entitled "Asia in the coronavirus disaster:  Which countries are emerging?" – a report that looks as the impact of COVID-19 across 15 Asia-Pacific economies through 2035.  In the report, it shows that the Chinese economy is likely to surpass that of the U.S. in either 2028 or 2029.  It covers two main scenarios: a "baseline" scenario, in which the crisis is a transient event like an earthquake, and an "aggravated" scenario that wreaks havoc on structural trends such as globalisation, urbanisation and innovation. Either way, China's quick success at containing the virus is expected to help it top the U.S. by the end of this decade.

Fall Forward: An End Of Year Message From The Managing Director 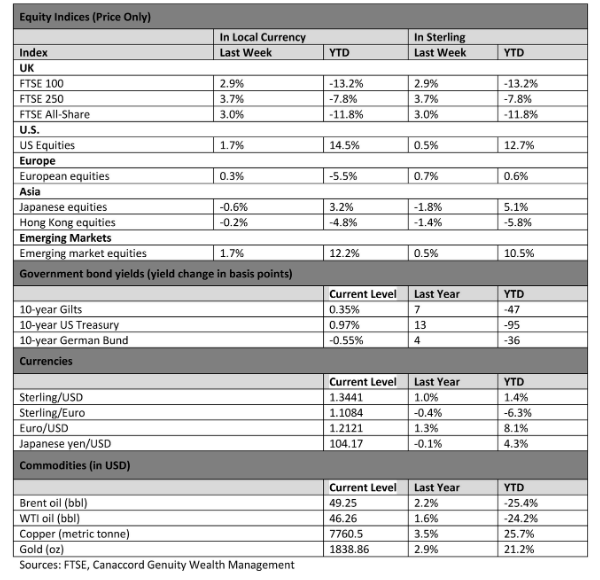 The pandemic set a devastating record on the 9th of December when the U.S. reported 3,054 deaths from COVID-19 - the highest single-day total yet.  In South Africa, Health Minister Zweli Mkhize announced that the country is now experiencing a Covid-19 pandemic second wave.  Herewith the latest totals: 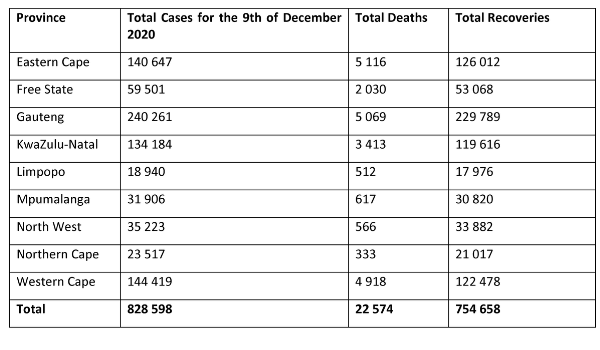 It was another winning week on Wall Street with all three major indexes closing out Friday's session at all-time highs.  The Dow Jones Industrial Average rose 1% for the week, while the S&P 500 advanced 1.7% over that period. The Nasdaq Composite, meanwhile, increased 2.1% this week.

Boris Johnson and E.U. leaders gave their Brexit negotiators until Sunday to get a deal as they warned that "very large gaps" remained between the two sides.  It said that if a deal were not possible by then, a "firm" decision would have to be taken to suspend talks and prepare for a Brexit without one.  The three significant obstacles of fair competition, governance of the deal, and fisheries remain.

Abiy Ahmed, Ethiopia's Prime Minister, cut the ribbon on a mega-highway linking south Ethiopia with Kenya's Indian Ocean port of Mombasa, alongside Kenyan counterpart President Uhuru Kenyatta, reflecting Ethiopian aspirations to become a regional powerhouse.  War since the 4th of November between Ethiopia's federal forces and the Tigray People's Liberation Front (TPLF) is thought to have killed thousands and displaced more than 950 000 people, according to U.N. estimates, some 50 000 of them into Sudan.

South African Airways (SAA), who has not made a profit in almost a decade and whose administrators suspended all operations in late September, has taken another step towards returning to the skies.  The Public Enterprises Department has appointed six non-executive directors for an interim board.  The six-member board will be responsible for oversight of state-owned SAA once its administrators receive the funding needed for a restructuring plan.

Days before R1.26bn in frozen funds were due to be released to Gupta-linked Chinese rail group CRRC, the Pretoria High Court on Tuesday handed down an order that the monies remain frozen until the company provides a bank guarantee for the same amount to the South African Revenue Service (SARS).  SARS – which has been preparing a multibillion-rand tax bill against local CRRC subsidiary CRRC E-Loco Supply based mostly on evidence that the company had deducted the kickbacks from its taxable income – argued that "that the moment the funds are released it will be externalised".

Many of Africa's most important economies  – including South Africa – will start duty-free trading of goods among themselves on the 1st of January when the eagerly awaited Africa Continental Free Trade Agreement (AfCFTA)  goes into operation.  Through this Trade Agreement, foreign investors will be incentivised to locate their manufacturing plants in Africa as it will provide them with a much larger market – of up to 1.4bn people –  more than those of any of Africa's 54 individual states.

On a different number note, Universal Music has acquired Bob Dylan's entire publishing catalogue in a nine-figure deal, the latest marker of the soaring valuation of music rights in the streaming era.