New motor vehicle sales for last month are down 12% on November 2019 – a further improvement on October's 25% year-on-year decline. According to car-financier Wesbank, its volumes are back at 70% of pre-Covid levels. November was a spectacular month for local equities with the FTSE JSE All Share Index rising by an impressive 10.5% month-on-month - its first monthly increase since July and its best month-on-month performance since April (+13.1% month-on-month).

The manufacturing PMI recorded a drop to 52.60 in November, compared with a level of 60.90 in the previous month growth in private sector credit in October quickened to 3.24% year-on-year from 3.12% in September. Expansion in the broadly defined M3 measure of money supply also rose, to 9.83% in October from 9.48% in September. South Africa had posted a trade surplus of R36.13bn in October, following a trade surplus of R33.36bn in the previous month.

The recently released Quarterly Labour Force Survey by Statistics South Africa, revealed that the country's official unemployment rate increased by 7.5% during Q3 2020, to a record high of 30.8%. Furthermore, under the expanded definition of unemployment, which comprises those without jobs along with others who have given up on finding employment, the true rate is a staggering 43.1%. 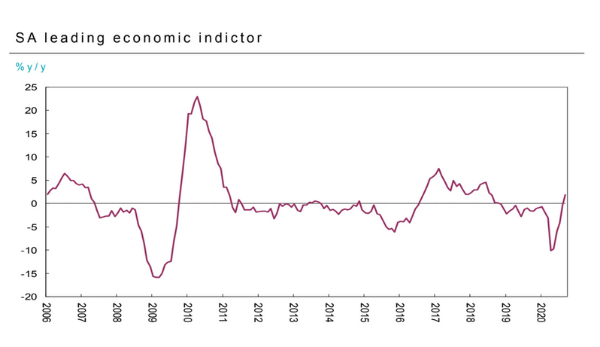 With the U.K. economy suffering more from the coronavirus than most advanced nations, the stakes couldn't be higher as Brexit trade negotiations enter their endgame.  The gross domestic product will likely be smaller than what it would have been had the U.K. stayed in the European Union regardless of the outcome. But reaching an accord would help avoid major trade disruptions come January 1.

According to the Nationwide Building Society, U.K. house prices rose in November at the most rapid annual rate in almost six years, despite the lockdown, as buyers rushed to take advantage of the stamp duty holiday.

The Swiss economy grew the most since at least 1980 in the third quarter as business activity recovered from shutdowns to stem the coronavirus crisis. Gross domestic product increased by 7.2%, driven by a surge in consumption and investment in equipment and construction. That compares with a forecast of 6% in a Bloomberg survey of economists and follows a slump of 7% in the previous three months.

The Federal Statistics Office said Germany's retail sales rose 2.6% month-on-month and 8.2% year-on-year in October in real terms. Both figures beat a Reuters forecast.  The month-on-month data followed an upwardly revised drop of 1.9% in September and, compared with February – the month before the pandemic started in Germany – sales were 5.9% higher.

Spain's economic recovery that started in the third quarter most likely continued this quarter as the impact of the second wave of coronavirus contagion has not been as severe as in the first wave, Economy Minister Nadia Calvino said.  She also said the government's net borrowing target next year would be around 110bn euros, the same as this year's.

Italy's government has approved a fourth stimulus package to support businesses hit by the latest restrictions to stem the spread of the coronavirus.  The package is worth 8bn euros ($9.6bn) and also delays tax deadlines for companies and expands cash handouts for workers in tourism and the arts, which have been severely disrupted by the pandemic.

President-elect Joe Biden has urged Congress to pass a coronavirus aid package put before them. The $908bn Covid-19 relief bill is a revised attempt at breaking the deadlock in package negotiations between Democrats and Republicans. Biden added that anything passed now before his inauguration would be "at best just a start".

November saw equity markets rally by over 10.75%, likely reflecting investors' enthusiasm for the vaccine news and approval for the impending end of the Trump era.

Robust demand for housing has outstripped supply, boosting home prices out of the reach of many first-time buyers, despite builders ramping up construction. The government reported this month that single-family homebuilding, the largest share of the housing market, raced to the highest level since April 2007.  Though homebuilder confidence is at historic highs, builders have complained about shortages of land and materials.

Applications for unemployment benefits have increased for two straight weeks, and about 13.6mn Americans will lose government-funded jobless benefits a day after Christmas.

The Dallas Fed manufacturing business index in the U.S. eased to 12.00 in November, compared with a level of 19.80 in the previous month while its production index, a key measure of state manufacturing conditions in Texas, tumbled to a reading of 7.2 this month from 25.5 in October. Factories in the region reported a significant slowdown in new orders and were less upbeat about the outlook.

Exxon Mobil announced on Monday that it would significantly cut spending on exploration and production over the next four years and would write off up to $20bn of investments in natural gas.  The company struggled to adapt as oil and gas prices tumbled this spring when the coronavirus pandemic took hold. While oil prices have recovered somewhat in recent months, they remain much lower than they were at the start of the year.

Tesla Inc. will be added to the S&P 500 Index in one shot on December 21, a move that will ripple through the entire market as money managers adjust their portfolios to make room for shares of the $538bn company.

India's economy recovered faster than expected in the September quarter as a pick-up in manufacturing helped GDP clock a lower contraction of 7.5% and held out hopes for further improvement on better consumer demand.  "Broad-based demand revival and a low base in 2020 will support strong GDP growth of 10.8% in India in fiscal 2022 ending March 2022, following a decline of around 10.6% in fiscal 2021 – the country's first contraction in four decades," Moody's Analyst Sweta Patodia said.

Japan's government will compile a stimulus package next week that would seek to fill slack in the economy, not just with spending but incentives to boost green and digital investment, economy minister Yasutoshi Nishimura said. He said it was crucial for the government to fill the economy's 34tn Yen ($326bn) output gap, caused in large part by the hit to growth from COVID-19, to prevent Japan from sliding back into deflation.

For the second straight quarter, the world's leading chief financial officers have a more positive outlook on the Chinese economy than they do for the economy of the United States. China's $14tn economy, second in size only to the U.S., accounts for almost a third of global growth each year.  China's economic rebound from the coronavirus pandemic is gathering pace as the year is drawing to a close.  According to the National Bureau of Statistics, the manufacturing Purchasing Managers' Index (PMI) rose to 54.9 in November from 53.60 the previous month. That was the highest since September 2017 and beat the median estimate in a Bloomberg survey of economists.

On another note, a state-owned Chinese group caught up in the country's spate of defaults owes billions of dollars to lenders, raising concerns that bond market tremors could also sweep through the banking sector.

Wall Street Hits Another High, While South Africa Gets A Low Blow 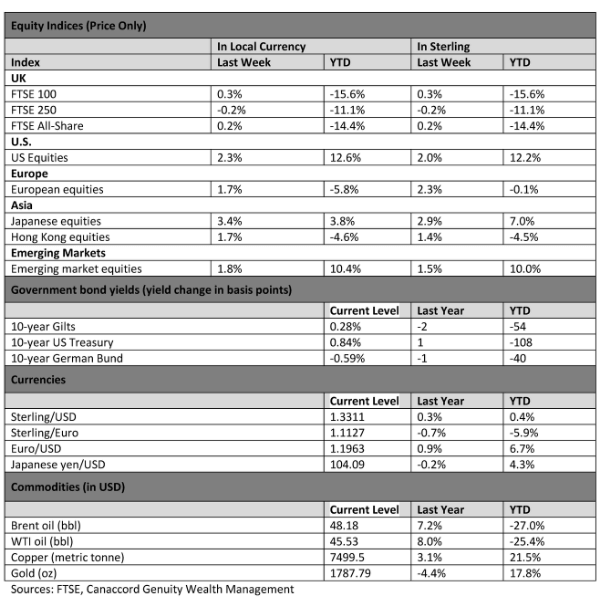 Britain's Medicines and Healthcare products Regulatory Agency (MHRA) granted emergency use approval to the Pfizer-BioNTech vaccine. In doing so, Britain became the first Western country to allow its health service to begin mass inoculations against a disease that has killed more than 1.4 million people worldwide.

In South Africa, the National Coronavirus Command Council (NCCC) met to discuss the prospect of new restrictions to contain a spike in new Covid-19 infections in so-called hot spots around South Africa.

Some of the proposed restrictions include:

*The introduction of a 22h00 curfew, with restaurants closed by 21h00;

*A ban on the consumption of alcohol in public areas;

*Restricting gatherings — with funerals and church services set to be limited to 100 people indoors and 250 people outdoors;

It is unclear when these reported restrictions will take effect.

In other health-related news, the World Health Organisation said that Malaria could kill more people in sub-Saharan Africa than Covid-19 in 2020. Malaria infected 229 million people in 2019 and killed at least 409,000 globally.

The Organization for Economic Cooperation and Development predicted that the world economy would bounce back to its pre-pandemic levels by the end of next year -- though that recovery will be uneven across the countries and significant risks remain.  The organisation said that China would lead the economic recovery and account for a third of global growth next year. Europe, Japan and the U.S. will lag, while many poorer countries - particularly those that rely on tourism - will continue to suffer and require international aid.  It predicts the global economy will shrink about 4.2% this year and rebound by the same rate in 2021 before growing 3.7% the following year. After so many failed attempts to forge an agreement on additional help for the economy, renewed talk of a possible U.S stimulus package was unable to drive major gains in most world markets as investors adopted a "wait and see" stance.