A WORLD IN DISORDER

The combination of a U.S. election, COVID-19, a new justice for the Supreme Court, and military accidents, have primed investment markets to enter an emotional trading phase.

The ongoing rise of Covid-19 infections in Europe (and elsewhere) remain a source of uncertainty for the pace of the economic recovery going forward.

During a joint media briefing last week, the WHO and the Global Preparedness Monitoring Board (GPMB) discussed global preparedness in the instance of another widespread infectious outbreak.  Dr Tedros Adhanom Ghebreyesus said: "Covid-19 has shown that, collectively, the world was woefully under-prepared – but with humility and togetherness, we can plan for the long term and invest in health and preparedness."

"Profits from deadly drug wars, fortunes embezzled from developing countries, and hard-earned savings stolen in a Ponzi scheme were all allowed to flow into and out of these financial institutions, despite warnings from the banks' own employees," according to the probe.

Kaizer Kganyago, spokesperson for the Special Investigating Unit (SIU) on the progression of the unit's COVID-19 corruption investigations:  "We were saying to him that we are looking at 700 companies, and the value of that at the time was round about R7.5 billion worth of contracts. But by saying that, we are not saying that all R7.5 billion is irregular, we are just placing the value of the contracts at the time we are looking at."

The City of Cape Town released the dam levels statistics on Tuesday, which showed dam capacity for the Cape Town metro rose from 96.4% to 98.2%.  The total capacity of dams supplying the metro increased to 98.2% between 14 September and 21 September 2020, a 1.8% rise from the previous week.

Dubbed "the Notorious R.B.G." by youthful admirers, Justice Ruth Ginsburg by the time of her death was the subject of Hollywood movies, songs, a board game and countless Internet memes.  She passed away having attained not only the heights of the legal profession but also, improbably enough, the status of feminist pop culture icon.

Of all the stories she loved sharing, this is our favourite:  Ginsburg's mother, Celia Bader, who died the day before Ginsburg graduated high school, never attended college but worked as a bookkeeper. Ginsburg would sometimes ask audiences: "What's the difference between a bookkeeper in New York's Garment District and a U.S. Supreme Court justice?" Her answer: "One generation."  We honour the legacy she forged.

The rand opened the week at R16.30, not far off its best level in six months, but then tumbled more than 3% on Monday, the most among emerging market currencies, as the threat of new pandemic-related lockdowns in the U.K. and other countries in Europe prompted concerns about the global recovery.

Local sentiment was worsened by the Treasury committing to another bailout for ailing state carrier South African Airways. The airline's business rescue administrators said another R10.5 billion would be provided to the carrier.

Traders have warned that South Africa's fiscal woes, with debt threatening to break the 100% of gross domestic product (G.D.P.) mark, pose a serious risk to investment and sentiment.

Bonds were also weaker, with the yield on benchmark 2030 government paper up 13 basis points to 9.44%.

A recent court case revealed that the South African Post Office is broke and it may struggle to pay salaries in September.  IOL reported that this is one of the points which emerged when the Post Office Retirement Fund unsuccessfully tried to force the Post Office to contribute to workers' pension fund.  According to the report, its branches only generated revenue of R125 million – around half of the budgeted amount – while overall revenue was R744 million below budget.  The Post Office's challenging financial situation should not come as a surprise. It recently requested R4.9 billion in support from the government to continue operating.

Trellidor reported a 66% decline in headline profit, with sales down 18% to R422 million in the year to end-June. In the last three months of the financial year – at the height of lockdown – revenue was R72 million below the internal forecast for the quarter.

Attacq, which owns Mall of Africa and Gauteng's Waterfall City mega-development,  posted results for the year to end-June this morning, showing that its net asset value per share declined by almost 26%, while the valuations of its S.A. properties fell by nearly 9%.

In a trading update, Telkom said it has entered into a payment plan with the South African Revenue Services (SARS) to pay an outstanding liability (including interest) of R870 million. The money has to be paid by end-March.  Telkom lost a case in the Supreme Court of Appeal earlier this year over the liability, which dates back to 2012. It relates to a disputed R3.96 billion foreign exchange loss following the sale of a subsidiary.

The monetary policy committee kept the repo rate unchanged at 3.5%, and governor Lesetja Kganyago said that the Reserve Bank's models do not make provision for further repo rate cuts in the near term, but foresee two rate increases in the third and fourth quarters of 2021.

European stocks had a brighter day, following the most significant drop in the region's bourses since June on Monday. London's FTSE 100 index climbed 0.8%, while Frankfurt's Xetra Dax rose 0.4% and the continent-wide Stoxx Europe 600 index advanced 0.2%. French equities were lower, though.

Sterling took a hit after British Prime Minister Boris Johnson told Britons to go back to working from home, along with new curbs on pubs, bars and restaurants that he said could be in place for as long as six months without some form of a vaccine.  Sterling slipped 0.6% against the dollar to trade at $1.274, its lowest level since July. The currency was weaker even though the governor of the Bank of England made it clear that it did not plan to push interest rates below zero in the near future.

Sweden unveiled a budget including a plan to reboot the virus-hit economy with a ten billion euro stimulus which will take the country's finances into deficit for the first time in five years by 4.2% of G.D.P. this year and 1.6% next year.

In terms of individual share price action, Germany's United Internet plunged more than 24% by the afternoon after lowering its outlook, while Network International dropped 11% to extend a recent slide.

Rolls-Royce tumbled 10.8% after announcing plans to raise £2.5 billion ($3.24 billion) to strengthen its finances. British Airways parent I.A.G. continued to fall, dropping another 12.1% to lead a broad decline for the travel sector amid rising coronavirus cases.

At the top of the European blue-chip index, German meal kit delivery company HelloFresh gained 6.7% amid speculation of further lockdown measures in Europe.

Benjamin Graham, referred to as the father of investing, introduced us to the concept of Mr Market in his best-selling book, "The Intelligent Investor".  In it, he said that we need to make the market serve us, not the other way around. He taught that we only get onto the front foot after realising the ADHD, manic-depressive Mr Market determine share price movements.

The reaction by U.S. traders to the quarterly results from Slack Technologies suggests Mr Market's attention deficit disorder is now acute. Slack reported that their Quarterly revenue was up 49% year-on-year with the full year's increase pencilled in at 40%; large customers rose 37% in number and there were significant positive swings in free cash flow, profit margins and earnings.  Yet the Slack share price dropped 14%.

Oracle – the American computer technology corporation – has won a bid for the U.S. operations of TikTok, the popular social media app that allows users to view and share videos. The new deal with Oracle includes a "commitment to establish TikTok as a global company" with its headquarters in the United States, a move which "would mean 20,000 new jobs."

Energy stocks took a hit as crude oil prices dropped for the second week in a row, tumbling on Friday below $38 per barrel. As recently as 31 August, the price was above $43; it had been above $40 since early August.

Inflation remains below the U.S. Federal Reserve's 2.0% target, but it's rising, despite high unemployment. The Department of Labor on Friday reported that consumer prices rose 0.4% in August compared with July, or 1.3% from a year earlier. In contrast, the year-over-year rise was just 0.2% as recently as May.

While no significant policy moves are expected when the U.S. Federal Reserve Board concludes a two-day policy meeting today, Chairman Jerome Powell could offer some further details on a recent shift in how the Fed views inflation. Powell said last month that the Fed wouldn't worry as much as it previously had about the prospect of low interest rates triggering rising prices.

Chinese President Xi Jinping told the United Nations General Assembly on Tuesday that Beijing has "no intention to fight either a Cold War or a hot one with any country," as tensions grow between China and the United States.

"We will continue to narrow differences and resolve disputes with others through dialogue and negotiation. We will not seek to develop only ourselves or engage in a zero-sum game," Xi said in a pre-recorded video statement to the annual gathering of world leaders, conducted virtually this year due to the coronavirus pandemic.

In the Asia-Pacific region, a selloff in the shares of HSBC and Standard Chartered deepened. Hong Kong-listed shares in both banks fell 2%, taking losses for each of the Asia-focused lenders to 10% during the past two sessions. The pair were among those named in media reports on Monday that alleged international banks had flagged $2tn in suspicious transfers to U.S. anti-money laundering authorities.

Sri Lankan shares ended higher for an eleventh straight session on Tuesday, helped by gains in consumer staples and industrial stocks.  The benchmark stock index closed up 0.3% at 5,780.94. It is down 6% for the year so far and is off 26.5% from its lifetime high hit on 15 February 2011.  Cigarette manufacturer Ceylon Tobacco company added 1.6%, while conglomerate Hayleys Plc rose 10.7%, and were among the top boosts to the index.

Beijing is unlikely to approve an "unfair" deal Oracle Corp and Walmart Inc said they have struck with ByteDance over the future of video-streaming app TikTok, state-backed newspaper Global Times said in an editorial.

The top gainer on the Hang Seng was China Mengniu Dairy Co Ltd, which gained 1.14%, while the biggest loser was Geely Automobile Holdings Ltd, which fell 4.38%. 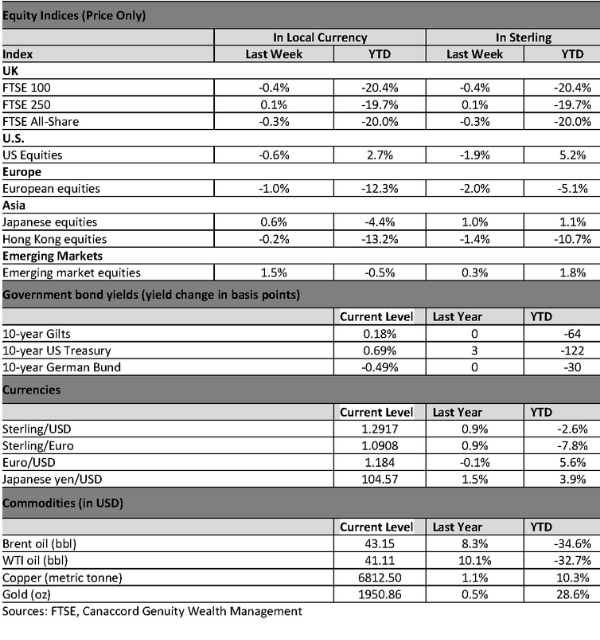